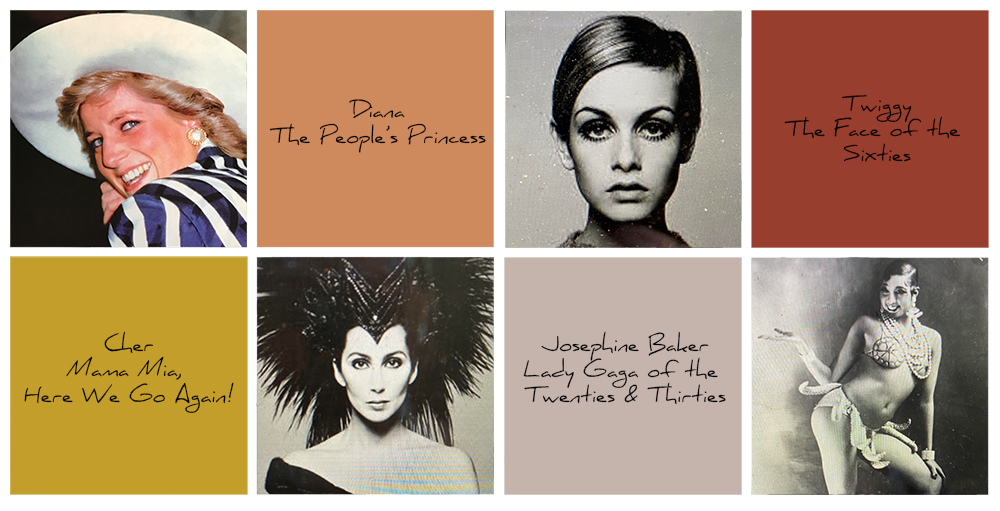 1  The Chanel Suit
The CHANEL SUIT, inspired by Coco’s lover, the Duke of Westminster, was not a success when it was first introduced. But after World War II Chanel reinvented the suit, as we know it today. This time it was a big success and became one of Chanel’s most iconic creations. It has influenced many look-a-likes. Zara brings out new versions, time and time again.
2  The Chanel Bag
The first bag Coco Chanel designed in 1929 was a clutch bag, like any other hand-carried bag that were available at the time. In 1955 Coco Chanel changed handbag history in adding a strap. For the first time, it was acceptable for upper-class women to carry a bag on their shoulders. The CHANEL BAG became the most popular item on every woman’s wish list.
3  Chanel Two-Tones Shoes
When it was launched in 1957, the press dubbed the TWO TONES shoes “The new Cinderella Slipper”. Celebrities like Brigitte Bardot and Catherine Deneuve adopted them immediately. Chanel chose the nude/black combo for a reason: the nude colour was intended to lengthen the leg, and the black cap toe to shortens the foot.
4  Chanel No 5
It was the first perfume launched by Gabrielle Chanel in 1921. When presented with different scents in five glass containers, numbered 1 to 5, she chose the fifth one. She told the master perfumer “I like No 5, I present my collection on the fifth day of May, the fifth month of the year, so it will be called CHANEL No 5. It will bring good luck.” It certainly did.

5  Yves Saint Laurent Le Smoking
In 1966 Yves Saint Laurent designed LE SMOKING, a tuxedo for women. Bianca Jagger married Mick in St Tropez in a white version. Catherine Deneuve has been a devotee. Designers have all made versions of LE SMOKING, and today style icons wear theirs with or without trousers.
6 Calvin Klein Slip dress
In the 90s, Calvin Klein gave the “Little Black Dress” a serious makeover by turning it into a casual dress, closely resembling an underslip. The SLIP DRESS became popular as part of a new underwear-as-outerwear trend which is popular today.
7 The Birkin bag
In the 80s, Jane Birkin was seated next to Hermes’s CEO, on a flight from Paris to London. In no time she was complaining she could never find the perfect weekend bag and described what her dream bag would look like. He made notes. The BIRKIN BAG became, and remain, the most exclusive accessory in the world.
8  The Breton Top
The stripe top was first introduced as the uniform for all of France’s navy seamen. On a trip to the coast, Coco Chanel (her again) noticed it and incorporated it in her navy collection. Over the years, the BRETON TOP has been worn by such varied personalities as James Dean and Pablo Picasso, and today style icons Kate Moss and Alexa Chung.

9 Ray-Ban Aviator Sunglasses
Originally developed for US Aviators in 1936, to protect their eyes while flying, the style was credited as being one of the first sunglasses  to be popularised. In the 1970s and 1980s, celebrities like Elvis Presley, Steve McQueen, George Michael, Tom Cruise, worn the AVIATOR SUNGLASSES as fashion items mimicking military style.
10  The Basque Beret
The BERET was the traditional headgear of shepherds from the Basque Region. It then became part of some military uniforms. Once considered the national cap of french men, It’s now part of the stereotypical image of the Onion Man.
11  The Hermes Scarf
Princess Grace of Monaco used an HERMES SCARF as a sling for a broken arm. In “The Devil Wears Prada” Emily Blunt character sent boxes and boxes of Hermes scarfs in the air. Queen Elizabeth is frequently photographed wearing a Hermes Scarf over her head. And in 1950, a postage stamp featuring her wearing the famous scarf.
12  Lady Dior Bag
Given to Princess Diana by the First Lady of France, it was baptised in her honour the LADY DIOR BAG. It became her favourite bag and made a string of subsequent appearances. It remains the iconic item of the House of Dior.

1 Rolex Watches
The creator of the ROLEX WATCH took the first step in the world of  Swiss watchmaking to conceive a timepiece that could be worn around the wrist. Many models have been launched over the years. ROLEX watches have been seen on the wrists of political leaders, sports champions,
film and music stars, transforming each model into status symbol.
2   Converse All Stars
The company stated making baseball shoes in the early Twentieth Century. In 1923 the CONVERSE ALL STARS were designed in its present-day form.

3  Saville Row Suits
SAVILLE ROW reputation is built on bespoke tailoring. The term came to mean a suit cut and made by hand. Tailors started doing business in the area in the Eighteen Century. Henry Poole, later credited as the creator of the TUXEDO, opened in 1806 and moved to SAVILLE ROW
in 1846. It was followed by Henry Huntsman & Sons. Both companies still have showrooms in SAVILLE ROW.

4  The Burberry Check
BURBERRY’S signature CHECK is famed the world over.

5  Burberry Trench Coat
The BURBERRY TRENCH COAT was originally conceived to protect military officers against harsh weather. It has remained the company’s most recognisable piece and the foundation of the brand.
6  Lacoste Shirt
René Lacoste founded LA CHEMISE LACOSTE in the Thirties. It was aimed at tennis players. The company claims this is the first example of a brand name appearing on the outside of an article of clothing.
7  The Duffle Coat
The name DUFFLE derives from DUFFEL, a town in Belgium where the fabric originated. The design may have been a Polish military frock coat. In 1850, a British manufacturer developed a version of it, and the army purchased the coat for the Royal Navy. It was widely used during World War II, and the nicknamed “the Monty coat” after the iconic Commander Field Marshall Montgomery.
8  The Loafer
It was a Norwegian who first invented the classic foundation of the LOAFER SHOE. LOAFER symbolises high-class slip-on shoes.

9  The Tuxedo
There are two stories about the origin of the TUXEDO.
According to one school of thought, it was created by a resident of Tuxedo Park, New York. The other, an American on vacation in England, was introduced to the Prince of Wales. He asked the Prince for advice on formal wear. The Prince sent him to his own tailor, Henry Poole & Co of Saville Row. He was fitted with a black jacket and tie that was unlike anything worn in the United States for formal occasions. Back in New York, he wore it at a ball at the Tuxedo Club and gave it its name TUXEDO.
10  Levi’s 501 Jeans
First made with work in mind, using fabric from Nimes, in France (de – Nimes) LEVI’S JEANS later became a symbol of cool for rebellious youth and rebels, with or without a cause. Today LEVI’S JEANS are worn across the globe, breaking barriers between sexes, ages, and classes.
11. The BLAZER
The sartorial term BLAZER originated with the red BLAZER of the rowing club of St John’s College Cambridge, in 1825. The stripe BLAZER became very popular in the “Swinging Sixties” when the Beatles, the Rolling Stones, the Moody Blues… all band members were wearing stripes.

CARTIER TANK WATCH designed by Louis Cartier in 1916, an icon of modern watchmaking.