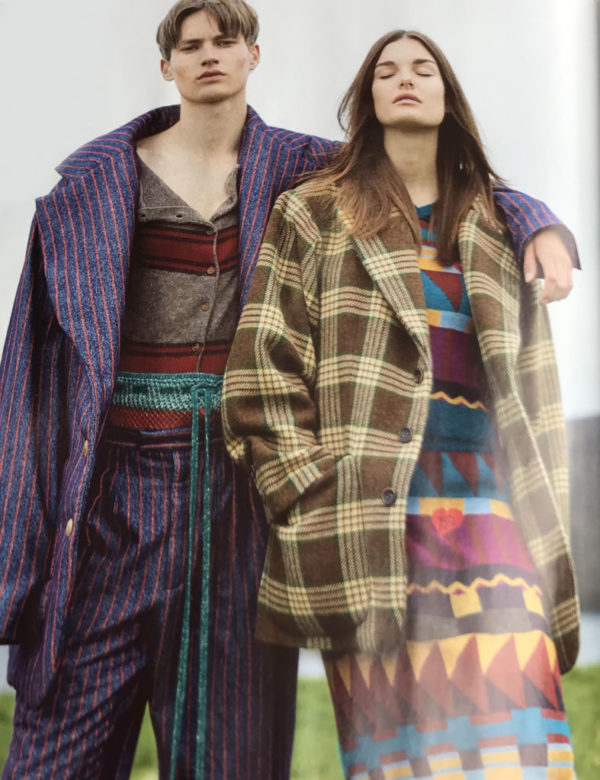 With terms like gender fluidity, gender-bending and androgyny becoming buzzwords, designers are sending men in skirts and women in tuxedos onto the catwalks.

Until the eighteenth century, both men and women of the elite class decked themselves out in elaborate dresses. An abundant use of silks, velvets, laces, as well as wigs and scented powders, were the norm. Men in pink embroidered jackets, gold and silver jewellery, high heeled shoes, were considered very masculine.

Fashion became feminised again in the nineteenth century when sexual difference through clothing was important in the social order. 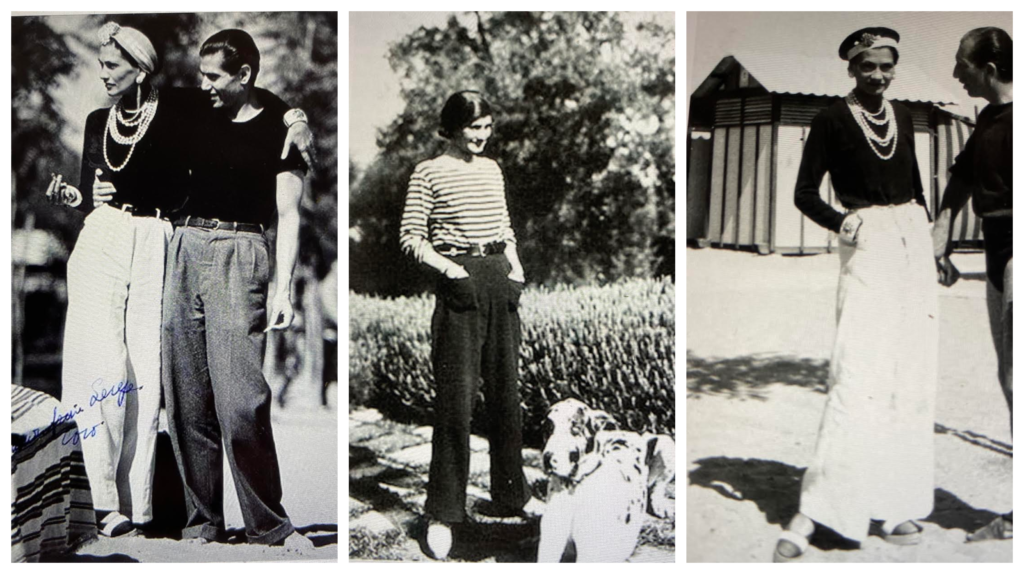 It was Coco Chanel, in the 1920s, who first made trousers popular for women, pioneering masculine tailoring. She took inspiration from the country wardrobe of her lover The Duke of Westminster.

In the 30s, the golden age of Hollywood glamour, Marlene Dietrich appeared in white tie and tails in the film Morocco. Audiences were mesmerised!

The attitude was forced to change during the austerity years of the 40s and 50s.

And then, with the unisex fashion of the “Swinging Sixties” and the social revolution, the gender lines became somewhat less clear. 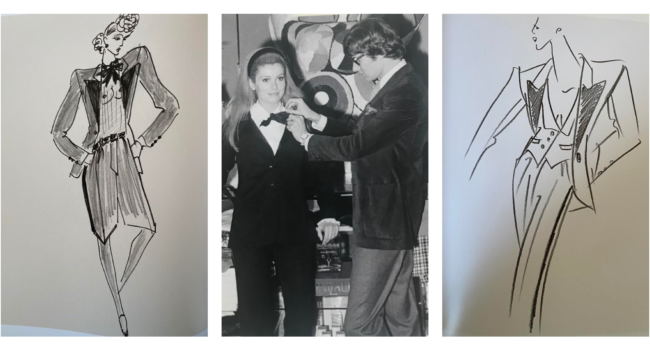 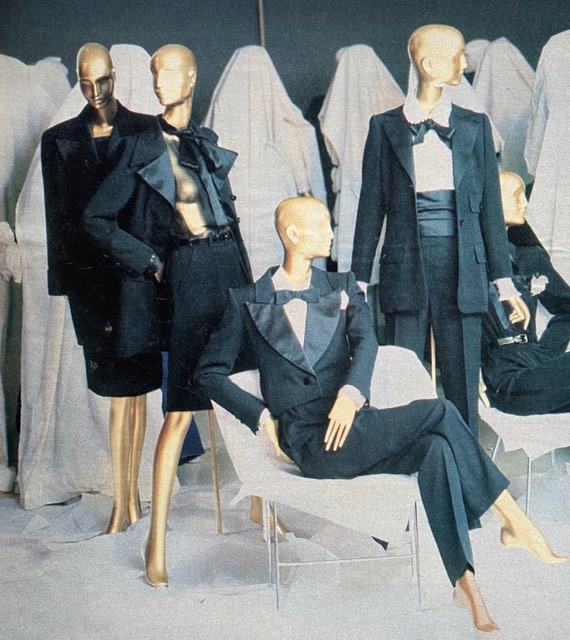 In 1966 Yves St Laurent introduced “Le Smoking”, a tuxedo for women. The masculine line was revolutionary. Later, he would interpret the mannish silhouette in gangster striped suits and safari jackets.

With the introduction of trousers, it was said that Chanel liberated women, and Yves St Laurent gave them power.

When Nan Kempner, a New York socialite, was refused entrance to a Manhattan restaurant wearing her YSL suit, her answer was to drop the trousers and march to her table wearing only the jacket as a mini dress. Et voila!

Bianca Jagger married Mick in St Tropez in a white version of “Le Smoking”. Today, style icons Kate Moss and Alexa Chung wear theirs with or without trousers. 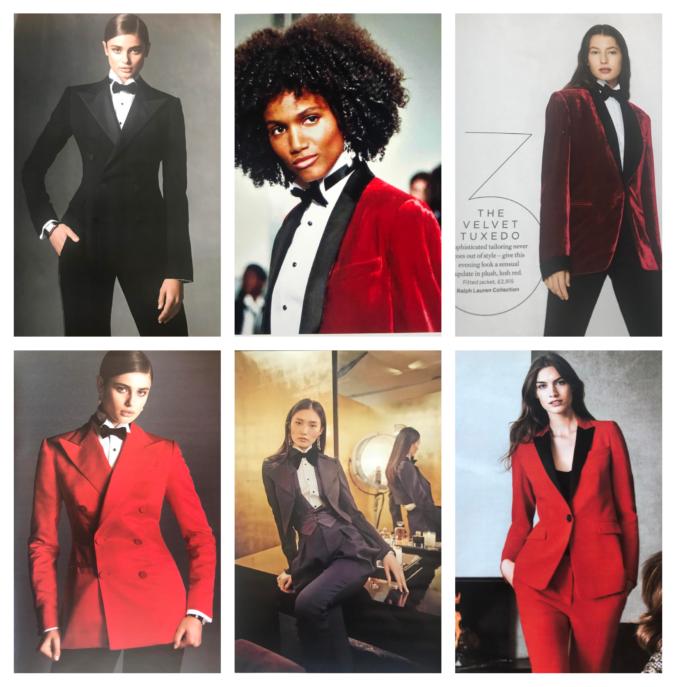 Fashion has always been a mirror of its time – in art, politics, commerce…

Since the 1990s, it has been trying to blur the gender lines, and today gender-neutral clothing is back in vogue. 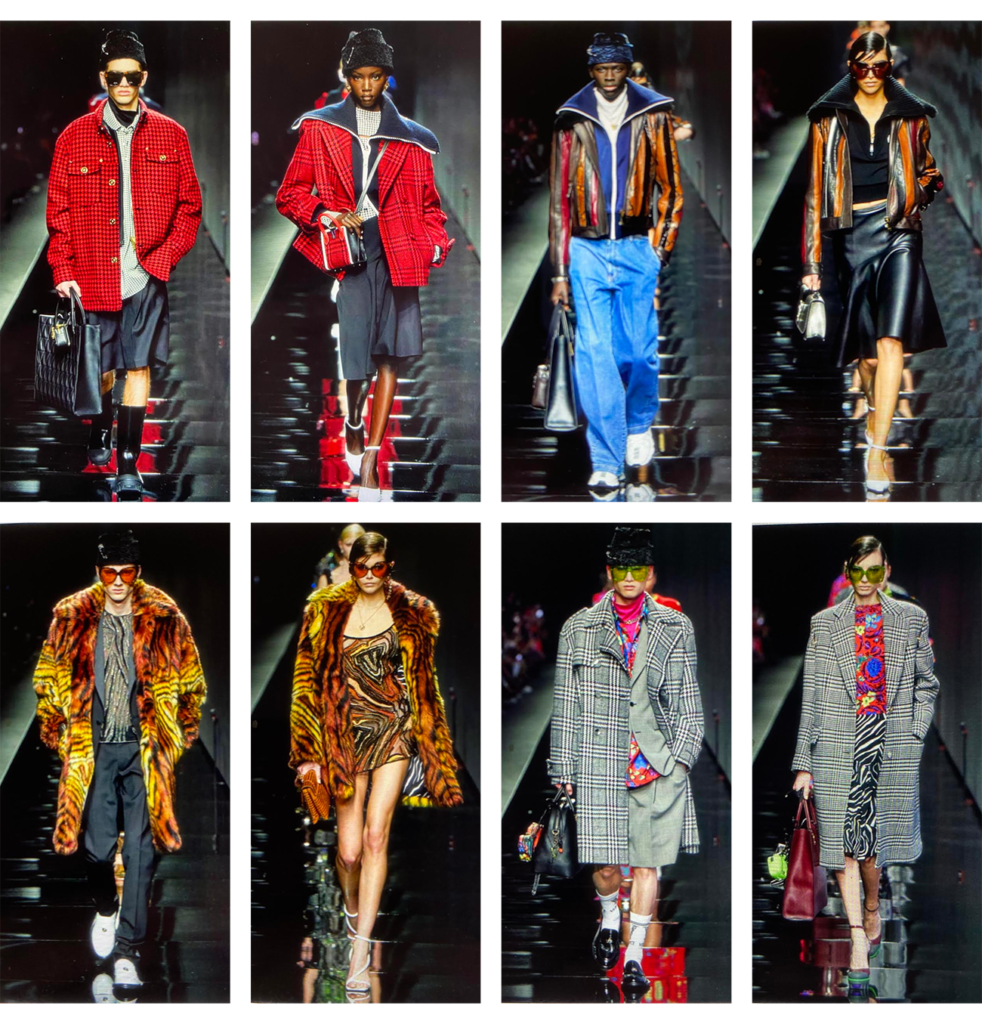 Because of globalisation, fashion houses have to be constantly innovative and think outside the box.   When international brands started turning their shows into girl-boy platforms and decked them in similar outfits, it was indicative of a gender political wave that will only get bigger. It reflects the social and sexual changes. 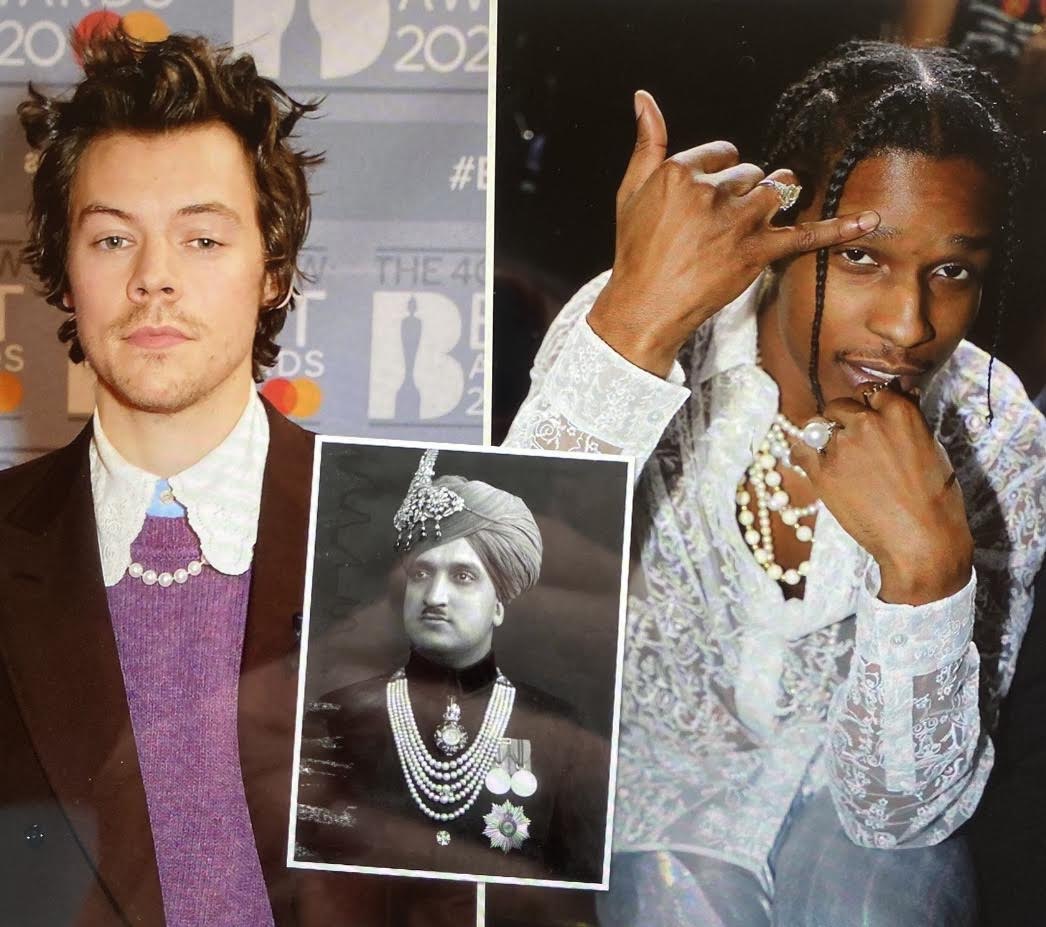 Fashion houses and jewellers claim that men are beguiling to buy pearls earrings and necklaces that were once associated with their grandmothers. An assortment of celebs, including Harry Styles and Pharrell Williams are helping to spread the idea that a modern man can wear pearls. 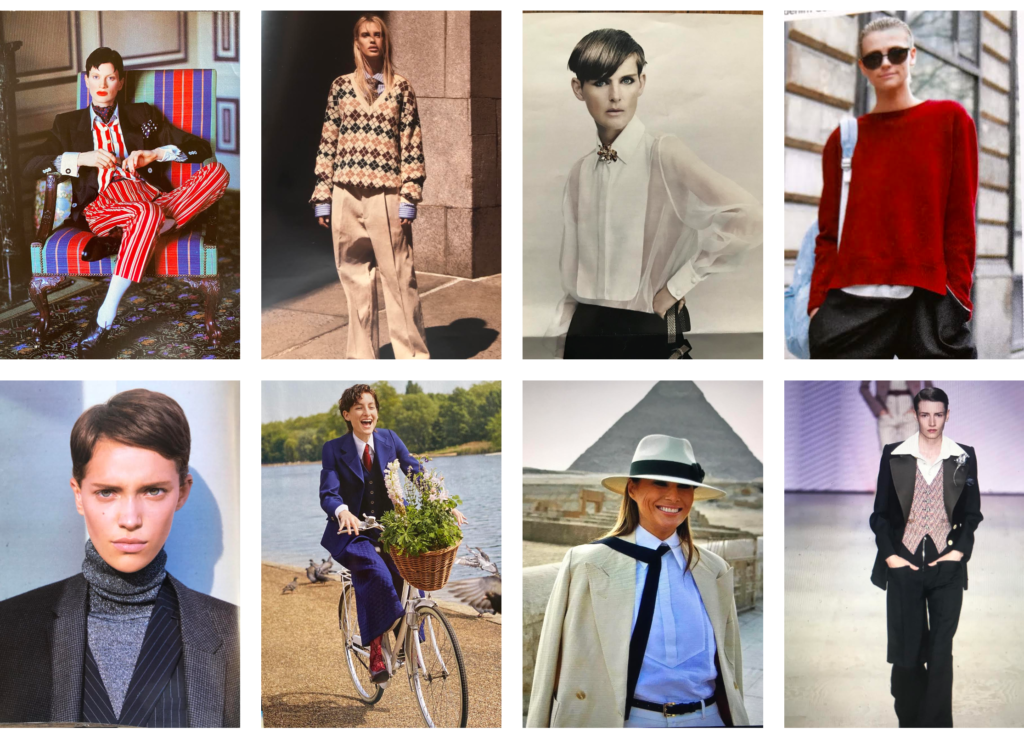 Today, the younger generation has a different attitude towards sexual identity. They often borrow elements of clothing from each other’s wardrobe – shirts, sweaters, blazers, hats, and caps.

Labels like The Kooples, encourage gender-swapping clothes, and unisex underwear is now a big thing. Clavin Klein was the first designer to cash in on it.

At a college last year, a group of male students stepped out in skirts proclaiming to counter the heatwave!

The A-list often swap their cocktail or evening dresses for something masculine. Among the sheer dresses and split skirts, tuxedos are bucking the trend. This does not mean forgoing flesh. Just leave off the shirt.

Young men care about their appearance, spend a lot of time at the gym, and money on clothing, skin and hair products.

Some men labeled “Metrosexuals”, are prepared to experiment with a man-skirt. It has been trying to go mainstream since the 1960s, and Jean Paul Gaultier has been its pioneer.

While this trend has still to find many takers, Hollywood celebrities like Kanye West, Jared Leto, Jaden Smith have shown their support. Remember David Beckham in his pareo?

And it’s not just young men who have changed their attitude towards fashion. Those who, ten years ago, might have regarded them as “gay clothes” are now wearing rainbow colours to go to the pub or the football match. Pink has been adopted by very masculine guys. 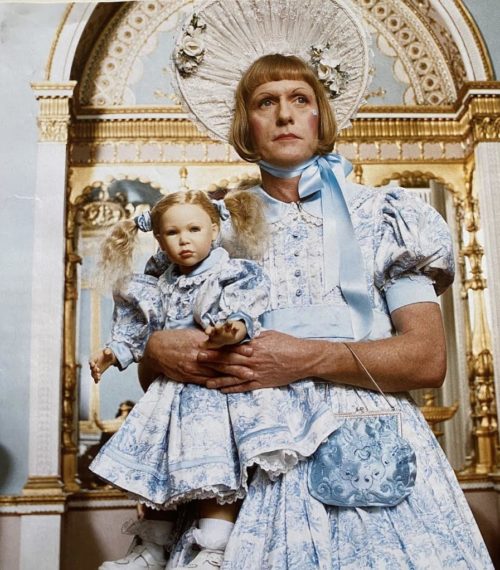 Recently, “cross dressing” has become a subject of press interest, and an antidote to concepts of society and gender. Grayson Perry as Claire his alter-ego, has become an accepted figure in the art world.

The Victoria & Albert Museum recently displayed a kimono owned by Freddie Mercury, pointing out that he was drawn to the garment for its ability to challenge ideas about gender and sexual norms.

In 2017, the #MeToo movement opened our eyes to gender roles and behaviour, and to the importance of equality between the sexes. In a very short time, we have become aware of identification. It has probably been the fastest evolution in history, thanks to the internet and social media.

Backed up by the voices of new generations, “genderlessness” has become a hot topic. 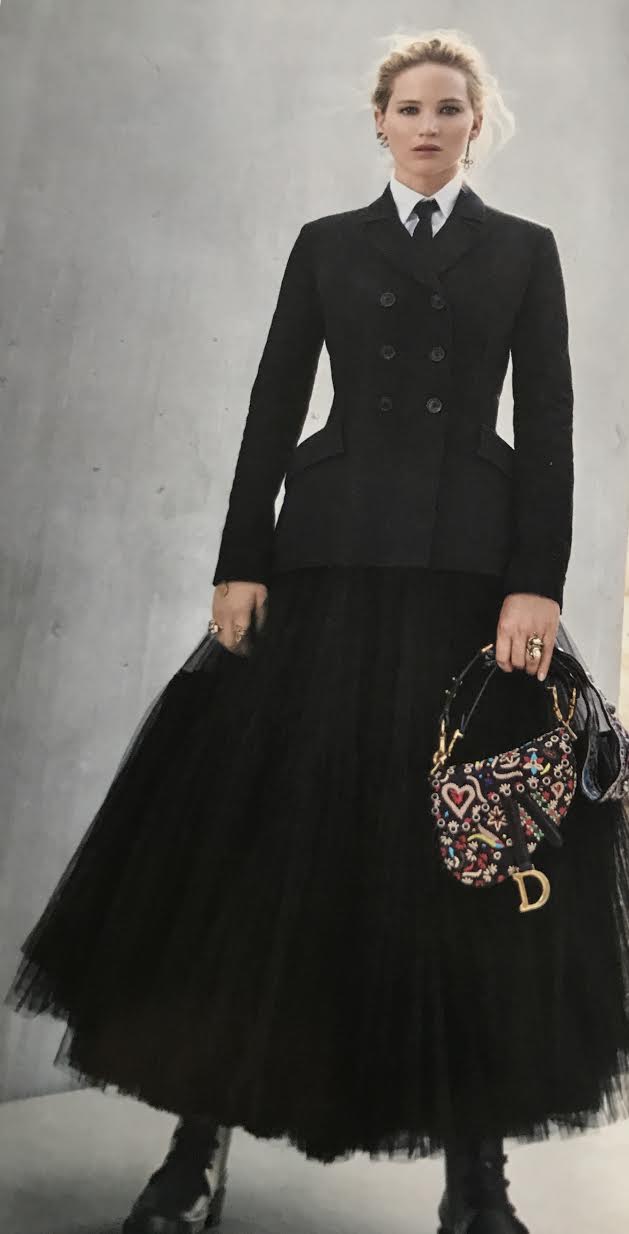 < Simply White > Table For One